How International Students Can Improve Their Chances of Getting H-1B Visas was originally published on Firsthand.

With this year’s H-1B visa registration season well underway, we spoke with International Student Career Expert Marcelo Barros about what international students should be doing now, common mistakes students make when searching for U.S. employment, and what we can expect from this year’s H-1B lottery. Below is an edited version of our conversation.

Firsthand: Given that the initial H-1B visa registration period is set to close soon, what should international students be doing at this point?

Barros: The most important piece of advice I can give to international students is quickly get your H-1B registration in. U.S. Citizenship and Immigration Services initial registration period for the fiscal year 2023 H-1B cap opened at noon EST on March 1st and is currently scheduled to run through noon EST on March 18th. So, there are only a few days left this year to get your registration in. By now, I hope, international students that are working on OPT (Optional Practical Training), for example, should have already worked with their employer to complete and submit their H-1B registration for this year’s lottery.

What if a student’s employer isn’t willing to file for an H-1B petition?

Obviously, that isn’t good situation to be in, and it’s one that must be avoided. For students who find themselves in this situation, though, it’s important to understand the reason or reasons why the firm isn’t willing to move forward with an H-1B registration. Is the firm reluctant to file because they think the process is too costly and bureaucratic? Or maybe they think the odds of selection are too slim? Maybe they prefer to try the following year because for now their international hire has plenty of OPT to spare? Maybe HR has a new rule in place that has put a stop on new H-1B filings?

Regardless, it’s important to understand what’s driving the resistance to file before international students can gather their thoughts and decide how to speak with their employers regarding the need to file. Good communication goes a long way, and deciding who to talk to is of even greater importance.

I hate to see international students wasting precious OPT, which allows them to work in the U.S. after they graduate from a U.S. university without the need of a working visa, but this is a limited perk. Obviously, it’s not smart for international students to work for firms that don’t intend to file for their H-1B petitions. Looking for a new employer readily willing to file is the right course of action for some. International students can’t waste time, and they need to know if it’s time to jump ship.

Last year, there was a lot of registration fraud and abuse of the H-1B system—firms submitting fake visa registrations for the same individual, for example. Can you talk a little about that? And is anything being done this year to prevent this?

The issue with fake registrations was more problematic than I’d initially realized. Last year, I was contacted by about 20 international students from different universities in the U.S who told me they were approached by firms who told them that if they paid them a fee they were willing to file multiple H-1B registrations on their behalf, even though there was no bona fide job offer from any qualifying employer. This is illegal. Obviously, individuals with multiple registrations have a considerably higher probability of being selected. So, some “H-1B consultancies” and phony employers have found ways to exploit the flawed H-1B registration and take advantage of international students at the same time. This has caused an enormous amount of frustration in the international student community.

As a result, this year you’ll for sure see a much stronger effort on the part of USCIS, the agency that manages the H-1B visa program, to combat fraud and abuse in the H-1B visa registration system. Also, along with the help of several other organizations, The International Advantage has formally provided input to USCIS regarding its new registration system, which again is flawed in many ways in our opinion. USCIS is aware of the issues that exist today with the current registration system, but anything with the government takes a lot of time to get resolved. So, we’ll continue to monitor any improvements or measures the government may put in place and, as needed, will update the international student community on what they need to do.

For now, the main priority is to get your H-1B registration in, and trust the process. That’s the focus. And, of course, always be careful and be on the lookout for scams—when in doubt, consult with your university resources.

What are the odds that an international student will secure an H-1B this year?

Regarding lottery odds of getting an H-1B visa, one can only speculate, so I feel it’s best we don’t do so. That said, we do know that last year USCIS received over 300,000 H-1B registrations. That’s a very high number of registrations. We also know that the number of H-1B visas available hasn’t changed over the years. Since 2006, the statutory cap has remained at 65,000, with an additional 20,000 made available for foreign professionals who graduate with either a master’s degree or a doctoral degree from a U.S. college or university. So, essentially, if you’re an international student getting a master’s degree in the U.S., at best you’re competing for one of the 85,000 visas available.

The moral of the story hasn’t changed, and it’s one that our international students already know: lately there haven’t been enough H-1B visas to go around, and if history repeats itself, knowing how aggressive hiring has been lately, this year there could be a particularly high number of international students who’ll receive unfortunate news from the H-1B lottery.

Given your work with universities around the U.S., what would you say schools are doing differently this year (if anything) to help international students find jobs?

Any other advice for international students you think is important to share?

We always talk about helping international students get hired, secure H-1B visas, and conquer the American dream. Lately, we’ve been doing this at a time when there’s war, sickness, and death all around us.

The unimageable recent events in Ukraine have left me paralyzed, and I know they’ve also greatly impacted our international student community. Right now, more so than ever, I feel our international students must take care of their mental health, and look for ways to remain strong, positive, and happy. They should never let the quest for a U.S. job be an all-consuming affair. 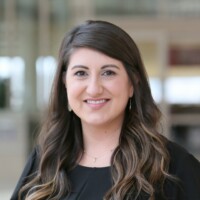